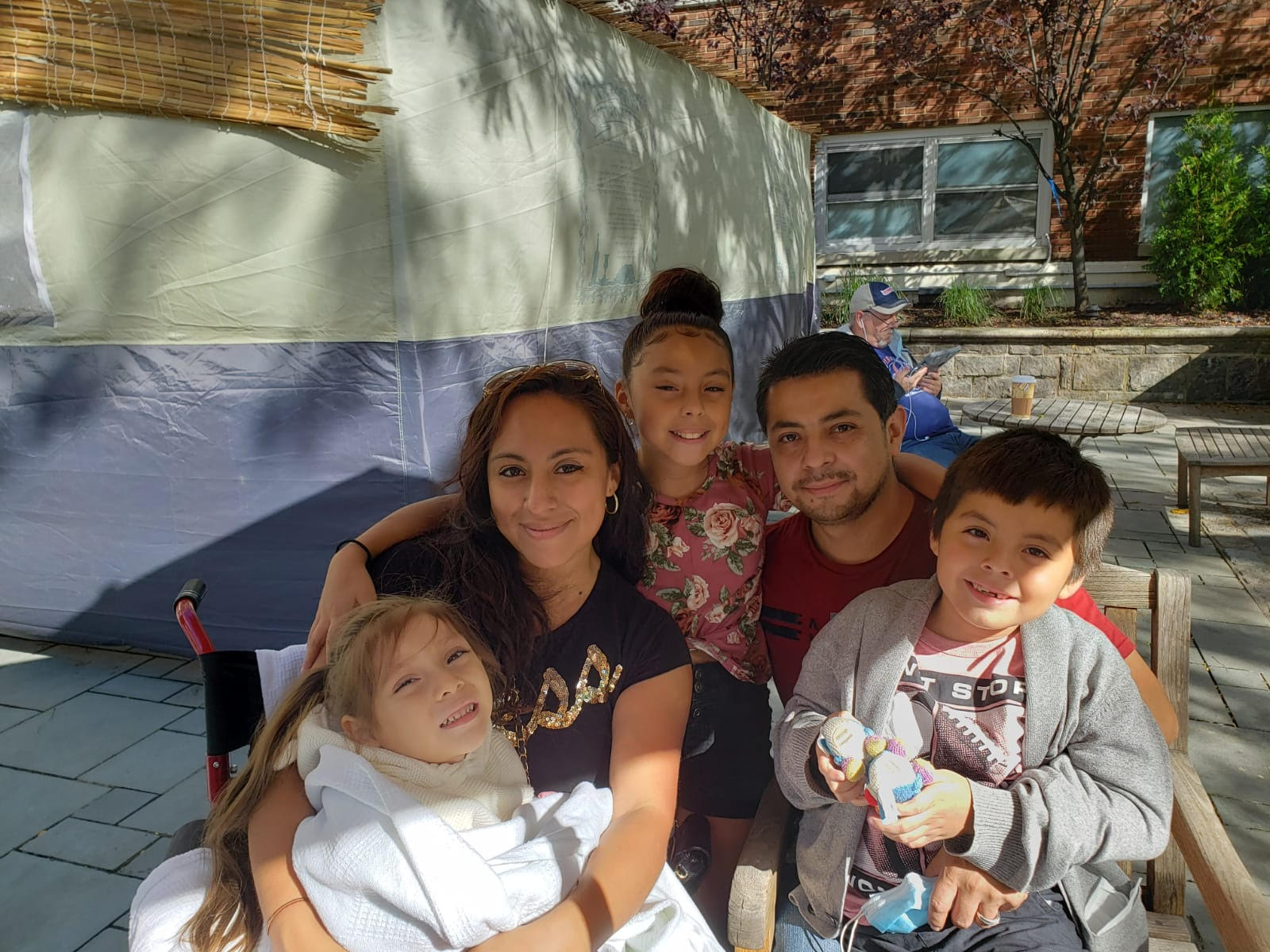 My husband Martin and I married young and had three children before I hit 30: Hailey who becomes a teenager this summer (and already can’t wait to be a camp counselor), our middle child and only boy, Jacob, who just turned 9, and our “baby” Mia who turned 5 in January.

I’ve always been a Daddy’s girl. I could never leave the nest so when we married and we thought about buying a house, I couldn’t leave my parents nor my sisters behind. We bought a two-family home in the Bronx where I had grown up and my dad and I split the mortgage and all house related bills. My parents lived right upstairs, and my two sisters lived in the finished basement. Although we all have separate entrances, it’s the same house, so it’s always busy: the bbq’s, the birthdays, the good and the bad.

Two years ago when the clock struck midnight and the year 2020 began, I had no idea what lay ahead—not only for the world but for our family. My daughter Mia started feeling ill, we were living in the early months of Covid and everything was completely different. I had tried to get her pediatrician to see her, but because of the pandemic they weren’t taking appointments. I knew I couldn’t stop there. I needed answers. Everything was done via Zoom and over the phone. I remember the doctor taking a look at her and saying, “there’s nothing visibly wrong with her, it's just growing pains… she’s pale because she’s not out as much, she doesn't get sun.”

On September 17th, I just took her to the emergency room to make sure I was wrong and it was just my imagination. We had taken her to urgent care and West Meds a couple of weeks prior because she had fallen and fractured her elbow on a very minor fall from the couch to the floor. That was when we noticed the lymph nodes. The doctor had confirmed they were due to a strep throat she had so she was given antibiotics. She took them for 10 days and I was told the nodes would slowly disappear, only they didn’t and she continued to get febrile nights.

I can still remember after being hours in the emergency room that Thursday night, after blood work and x-rays and check ups and my poor baby was annoyed and hungry. All she wanted was to go back home. Then after hours of being in that room, at nearly 12 am, the doctor said “we’re going to have to admit you to the 9th floor.” The doctor was wearing a face mask like we all were, so all I saw were her eyes. The look in her eyes, that look, I will never forget. She said it with such disappointment that I was confused. We’d never been admitted to any hospital. I didn’t know why the 9th floor made the doctor’s sad puppy eyes stand out. What did it matter what floor we were going to? Then we got off the elevator and I saw: hematology and oncology floor. My heart sank. They said it was because it was obviously blood related, although nothing was confirmed. They needed to keep her overnight for extensive work up and labs. 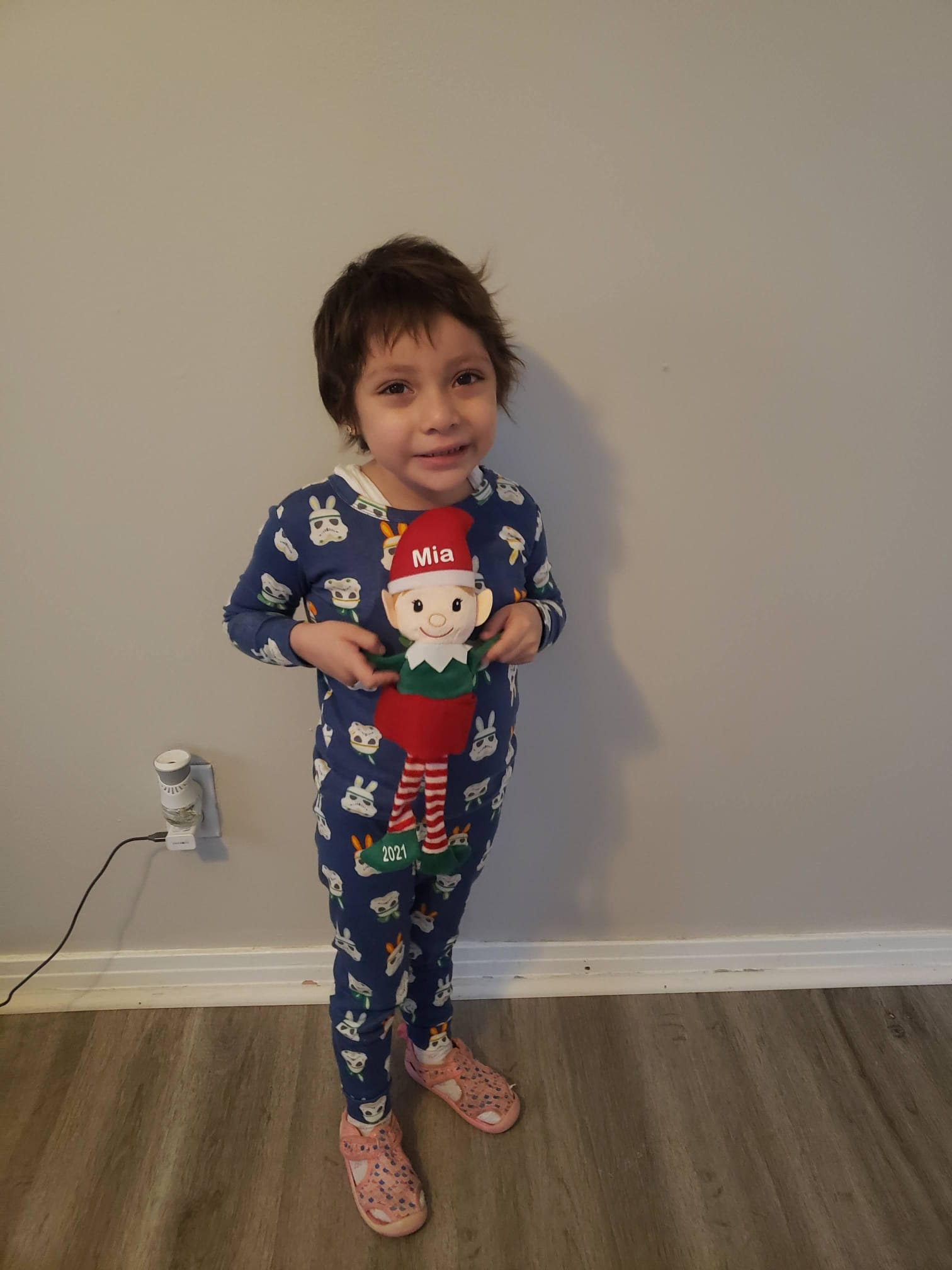 I wasn’t new to the oncology floor. My dad was a patient at Mount Sinai where he had been treated for almost a year for liver cancer. We’d go every week to immunotherapy and my two sisters and I took turns back and forth taking him to his appointments and making sure he was doing all he could and all we could to fight. I remember waiting in the lobby for him as he got his therapy and seeing children, no hair, no eyebrows and crying, thinking how hard this was on my 64-year old father, but how horrible it must be for that mother to be there with her daughter, her son. Never in my life would I have imagined after being admitted, after a week’s worth of poking and medicine and scans, and MRI’s, that the doctor would turn around and sit my husband and I down to tell us “ your daughter has what is called PRE B ACUTE LYMPHOBLASTIC LEUKEMIA.”

I remember there were six doctors in the room and a social worker who wrote everything the doctor was telling me.  After her diagnosis there was a pause, as though they were waiting for me to scream, to cry to react. But I couldn’t. I was frozen. I just looked outthe window as she spoke and talked about treatment. But then the side effects blurted out of her mouth like one of those horrible commercials that advertise a pill for one disorder but caution, the side effects can kill you. The doctor said Mia might not ever have children and then I said “time out” as if I was in a movie and I had to hit pause to take it in.

I remember holding on to her teddy bear and putting my head down and screaming and crying and asking God “why?”… what did I do that was so bad that he was doing this to my baby, to my 3-year old? After that long conversation with the doctors, we started treatment right away. We were hospitalized for three weeks—three weeks of tired nights, of being between sleeping with my baby in the hospital and sleeping at home with my other 11 and7-year old who asked everyday “ when is Mimi coming home?”

We were finally discharged Oct 8th, my sisters and parents made a small party at home as a welcoming; it was almost like a small relief to be back home but we knew we had a long way to go. After Mia was back home almost a month, my dad took a turn for the worse. He was admitted to the hospital where doctors tried to stretch out his longevity shortly after deciding it was best to place him under hospice care. My dad passed the very same night after being brought home, Nov 9th. In his house.

Now with further uncertainties, life seemed so unfair and scary. I was fatherless and caring for an ill baby. Could this be my baby’s destiny? Will she beat this? How do I get these horrible thoughts out of my head, all while still grieving the loss of my 65-year-old dad. Life had reached a turning point of no return, I felt like I was slowly drowning in quick sand only not quick enough. 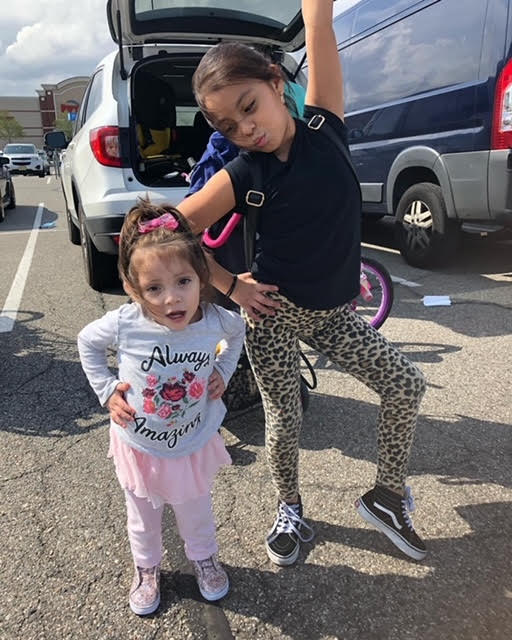 One day on our weekly chemo clinic visits, our Child-Life Specialist at Montefiore briefly introduced Sunrise Day Camp as an option. As parents to this new community we now belonged to, we were petrified at the idea of sending off our recently diagnosed daughter out on her own. She explained that her siblings could also attend. I respectfully took the sign-up package from her but deep down thought, along with my husband… "there is no way i'm sending Mia away on a bus, during Covid alone, with strangers

It wasn't until our next visit, she sat down with us and showed us a video and really helped us feel comfortable. We are so glad that she didn't give up on us. Sunrise Day Camp Pear River has been a breath of fresh air. I can still remember the first day we dropped them off in the bus. Neither of my three children had ever ridden the bus, especially not without us. It was not only scary for them, but i was petrified. I walked them to their seats and both Jacob and Mia cried and asked me to sit with them. It wasn't until one of the counselors gave me the signal that they had to start going, that I had to slowly run out the bus and wave goodbye.
I remember sobbing on my way to work, praying nothing went wrong.

But when I picked them up that very first day, I could see the excitement in all their eyes. They would not stop talking about the camp, the counselors, the games, the pool, everything. Mia spoke about her counselor Phoebe all summer. Hailey loved arts and crafts, especially making friendship bracelets. Jacob had always been more of a loner, but he made friends with everyone and wouldn’t stop talking about how much fun it was to be in the pool. Attending camp helped to distract everyone from the big picture. We didn’t lose focus on what we were still battling, but it helped knowing my kids were safe and everyone at Sunrise cared so much for them.

When we were asked to be ambassadors for this years walk, we were so happy and honored to be part of such a wonderful event. We walked last year and it was a great experience to have met families who are going through the same nightmares, and a relief to know families who still participate when their child is now doing so well. Sunrise gives us hope that one day Mia will attend camp just as a returning camper, and not a diagnosed patient.

The fact of the matter is that Sunrise camp has given us the opportunity to distract not only myself but all my kids of the reality we now live—the loss of grandpa, Mia’s diagnosis, and Covid. Thank you so much Sunrise for bringing some sun into our lives during the darkest of our time. It’s made this process less painful and bearable. Nobody wants to be a cancer family but having the support we have with this organization, we'll continue to count our blessings. We will move forward, because this is just a chapter in my daughter’s book, possibly the longest and hardest, but we will not let it be her story. 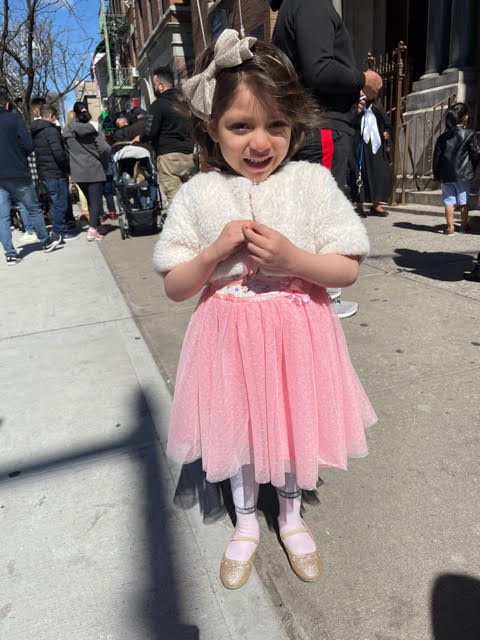 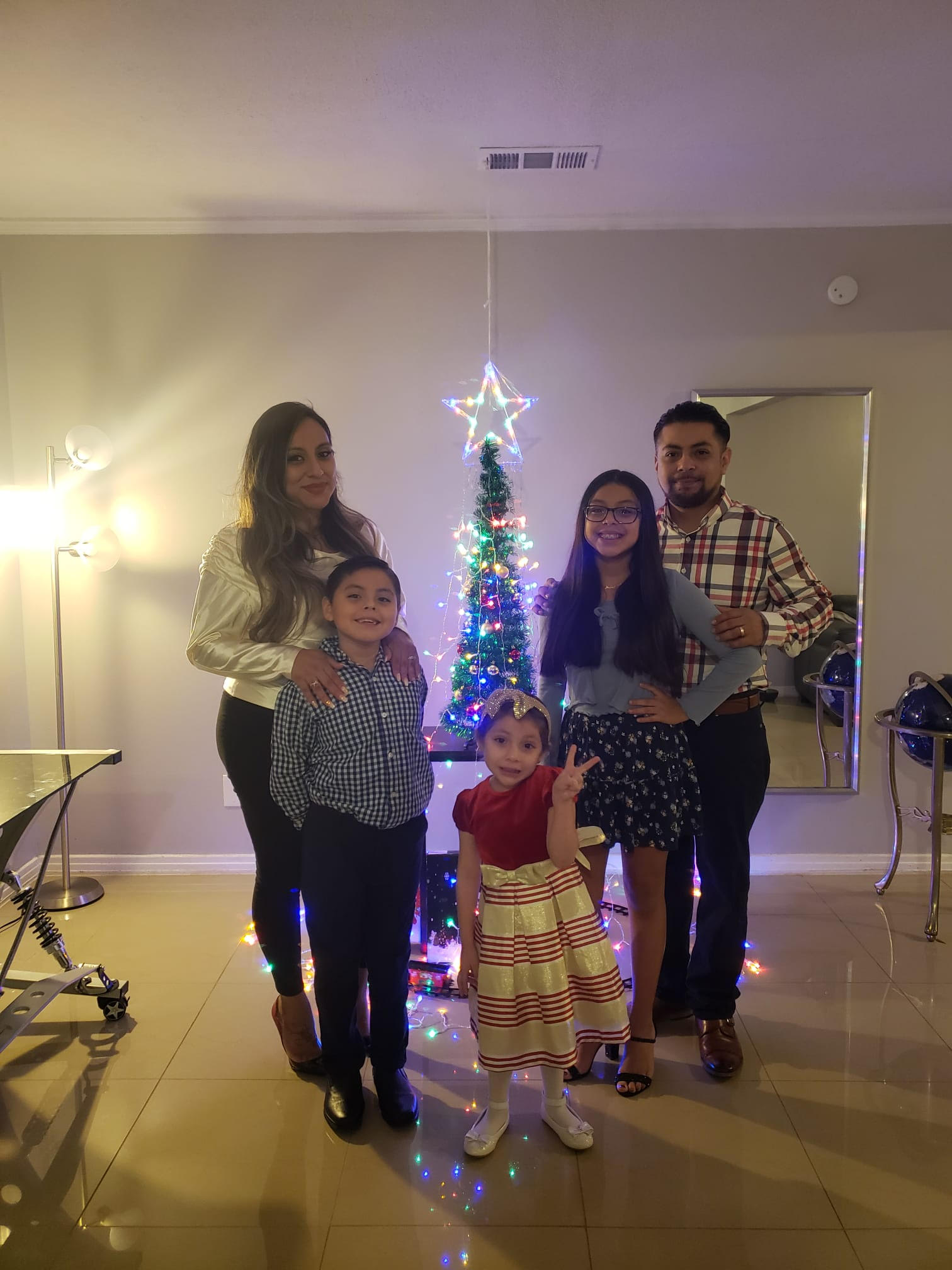